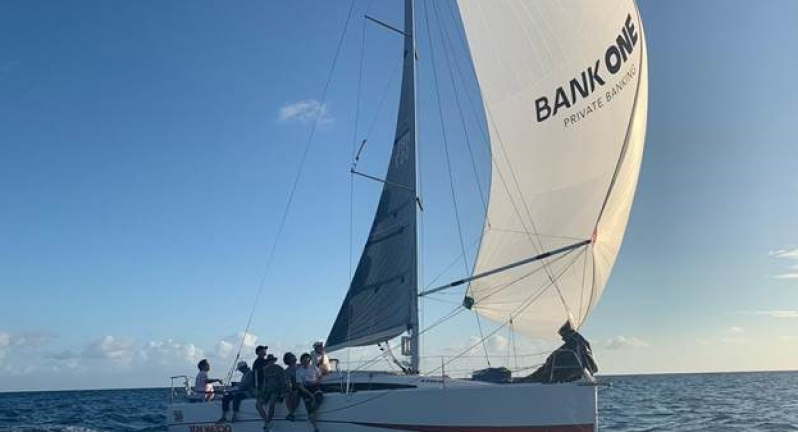 An extraordinary event in a unique year: the Championship was marked by unexpected and unwelcome twists due to the Covid-19 pandemic and its aftershocks. In such an uncertain time, race schedules had to be changed and several players were unable to come to Mauritius after the borders closed.

OCEAN VOX – BANK ONE had to deal with the absence of skipper and owner Luc Billard and of team mates Pierre Josserand, Olivier Daguin and Jérôme Thomas. A new A-team of core members had to be recruited and trained for the season.

Yann Jacobee was named skipper, and he was aided by sailing regulars Benjamin Turquois, Frédéric Mayé, Elodie Jacobee and Vincent Portugal. Marc Israel, Quentin Parpin and others joined the team on occasion. 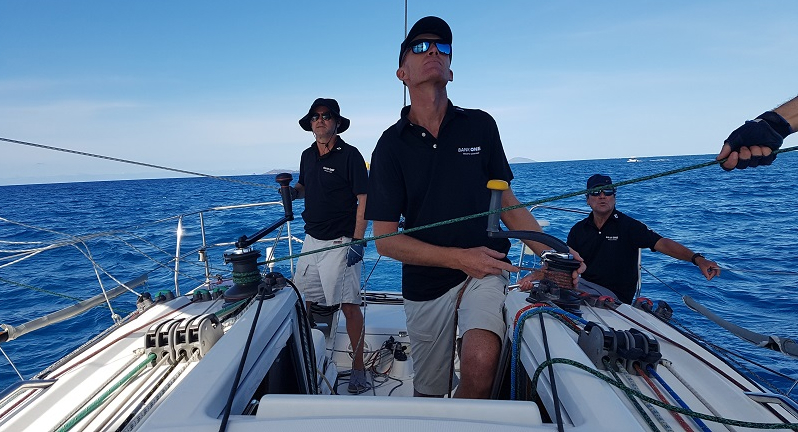 The new team took on the challenge of a very unusual season, and earned 5th place on the Far East Challenge Cup. It was far from the team’s goal, but it gave the team necessary training and experience. Our 3rd place in the ANAIK Challenge Cup showcased real progress, even though some particular manoeuvres weren’t performed to the expected standard and penalised the team.

It’s important to note that the upheaval in schedules also unexpectedly placed the Championship in turbulent weather conditions; the change in dates meant that our newly-formed team had to navigate harsh winds and rough seas. There was barely time to take one’s bearings.

Intensive training sessions were then organised, and they bore fruit: we were the Two-Time Winners of the Méphis Cup (round trip) and earned 2nd place on the Blue Shadow Cup!

As leaders of the moment in the overall ranking, OCEAN VOX – BANK ONE was about to take on the season’s peak challenge: a round trip around the island in three stages. Unfortunately, after the pandemic came the Wakashio oil spill disaster, which made the great loop around the island impossible. 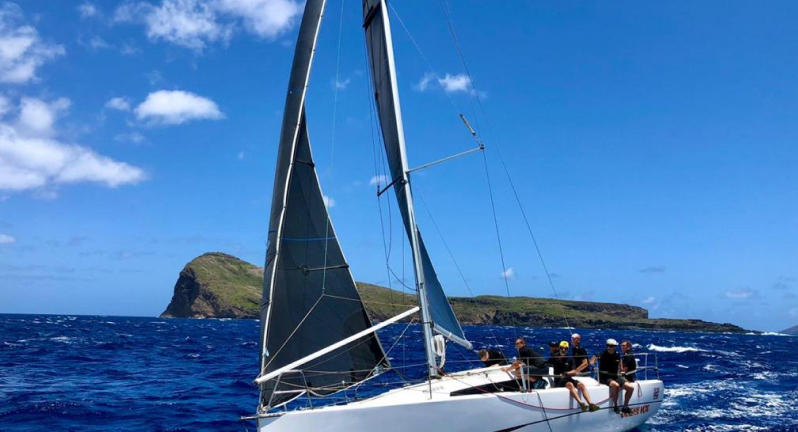 The 2020 Tour was then replaced by three heats in the Northern lagoon. With ease, the team won the first two heats; mid-way during the third race, we believed we’d pull off a triple win…Until the weather intervened.

The last day of the WEDLV will undoubtedly be seared in the minds of many. Shocks and surprises came one after another. Aeolus played his tricks and set the team’s nerves on edge, alternating with whispers of wind that barely moved the boat to great gusts that threatened the team’s safety. In the end, the team finished 4th, dropping from first place to last. Four boats abandoned the race that day, too, after the weather conditions proved too harsh.

In the overall rankings, OCEAN VOX – BANK ONE had consolidated its position as leader of the table, but was threatened by “Spry”, “Wasabee” and “Aldebaran”.

With two challenges to go, the equation was simple: if the team won the Suffren Cup they would win the season, even if they failed to win the TBS Challenge (the regatta that closed the season).

The team went on to win the Suffren Cup in a beautiful day in Port Louis: OCEAN VOX – BANK ONE crossed the finished line at the harbour and became CHAMPIONS OF MAURITIUS 2020. From sea sprays to champagne sprays, celebration was in order – and a certain Guillaume Passebecq, Head of Private Banking and Wealth Management at Bank One, handed us the trophy.

Our 3rd place in the last race can remain an anecdote for another day – the title, after all, was ours! 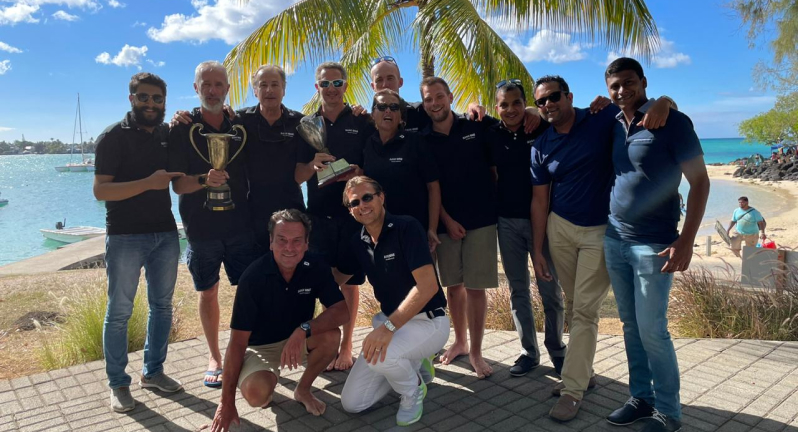 In a nutshell: OCEAN VOX – BANK ONE finally dominated its adversaries – and not by a small margin, either. The championship was won after intense work by our team, and the excellent synergy of the new members who joined us.

We’ll be the favourites for the 2021 season, but also the team to beat. We’re up for the challenge. The next season’s programme hasn’t been unveiled yet, but you can be sure that we’re the only team that’s organising extra training sessions at the moment. 2021, here we come! 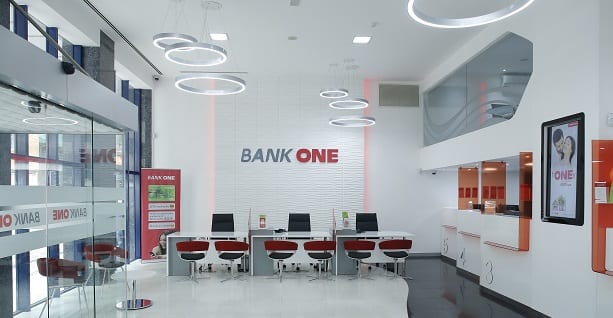 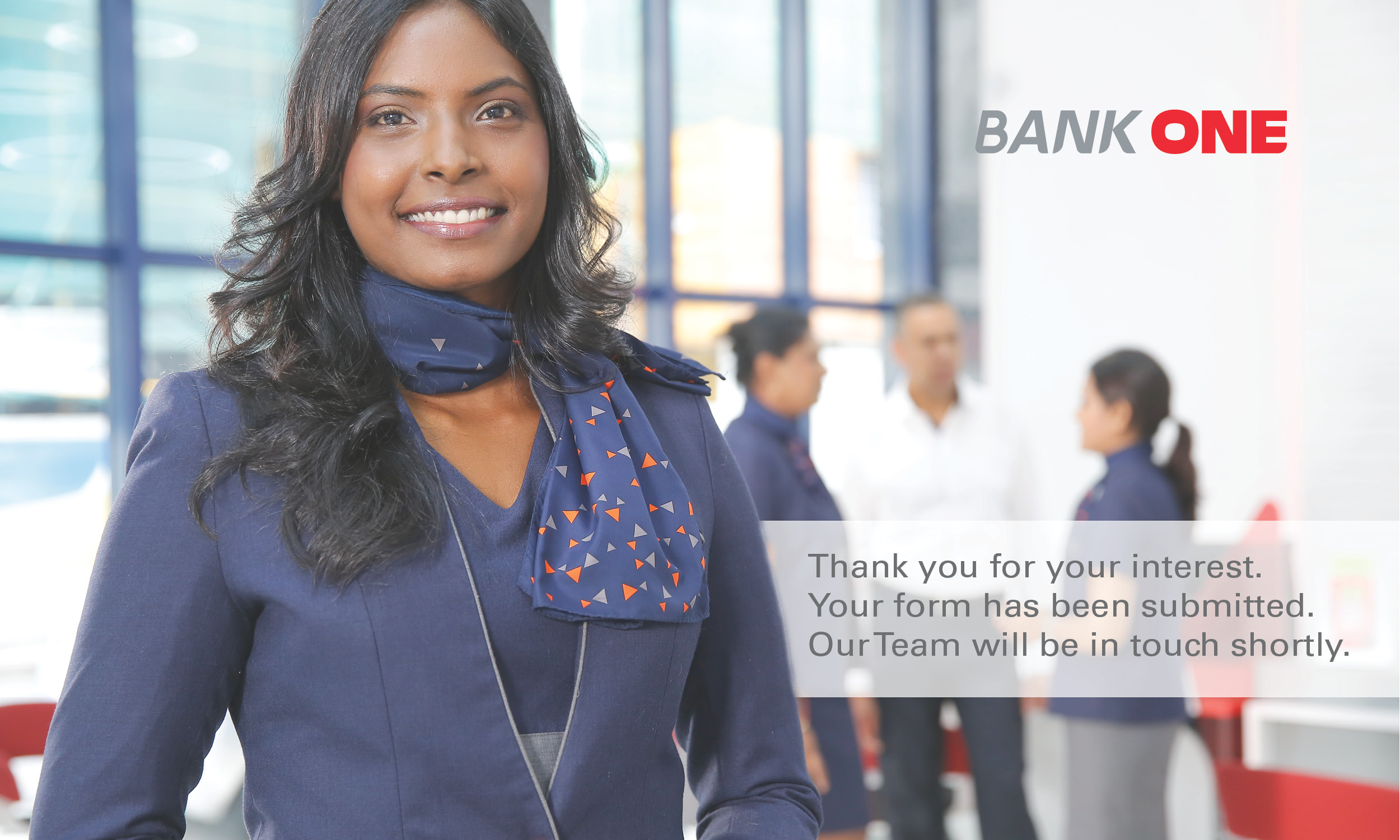 An error has occurred. Try Again.

Please read the following important information before accessing this Website:

This Website is owned and operated by BANK ONE LIMITED and the use thereof indicate that you accept the Bank’s Terms and Conditions of Use.

If you do not agree to the Terms and Conditions of Use, you should not use the Website.

The Bank may, at its entire discretion, at any time and without notice, modify or update such Terms and Conditions of Use. Such changes shall be effective immediately and you shall be deemed to have accepted same if you continue to use the Website.

Although the Bank endeavours to provide correct information on its Website, it does not give any warranty express or implied as to its accuracy, completeness and reliability.

The Bank does not accept any liability for any errors or omissions of whatsoever nature as regards information, materials, functions and applications contained in its Website or as to any third-party Websites linked to or from its Website.

1) Information available on the Website are allowed to be printed and / or downloaded for personal use only and not for commercial purposes.

You may not reproduce, transmit or store any information contained on the Bank’s Website on any other Website without the Bank’s written permission.

2) The Website is intended to provide general information on the Bank and its products and services.

3) You acknowledge that information transmitted via the Internet is susceptible to monitoring and interception and you will be bear all risk of using such means. You further acknowledge that any unsolicited information communicated to us via Internet cannot be guaranteed to remain confidential.

4) The Website may contain technical, typographical or other inaccuracies and you are urged to contact us to confirm all information contained on this Website before placing any reliance on it.

5) The Bank agrees to make reasonable efforts to ensure full performance of its Internet Banking transactions. The Bank will be responsible for acting only on those instructions sent through Internet Banking which are actually received. The Bank does not assume responsibility for any malfunctioning in communication facilities not under its control that may affect the accuracy or timeliness of messages you send. The Bank will not be responsible for any losses or delays in transmission of instructions arising or caused by any browser software. It will, furthermore, not be accountable should you provide incorrect instructions or if your payment instructions are not given sufficiently in advance to allow for timely payment or delays in mail service.

The Bank will not collect any information about you except where it is knowingly provided to us through this Website. The information we collect about you will depend on how you use the facilities offered via this web site.

The Bank requires information to understand your needs and provide you with a better service, and in particular for the following reasons:

The Bank will not sell or distribute your personal information to third parties unless it has your permission or is required by law to do so. You may request details of personal information which the Bank holds about you under the Data Protection Act 2004. If you would like a copy of the information held on you, please write to us.

If you believe that any information the Bank is holding on you is incorrect or incomplete, please write to or email us as soon as possible. The Bank will promptly correct any information found to be incorrect.

In no event will the Bank be liable for any damages including but not limited to direct or indirect, special, incidental, consequential or punitive damages, losses or expenses arising out of the use of its Website, or incurred as a result of any failure of performance, transmission of information, any interruption or availability of its Website, delay in operation or transmission, computer virus, loss of data, or otherwise.

Neither the Bank nor its directors, shareholders, agents, consultants, representatives, officers or employees shall be liable for any damages or losses resulting from your use or inability to use its Website or any information contained therein, including without limitation any direct or indirect, special, incidental, consequential or punitive damages whether arising out of contract, statute and tort or otherwise.

We use cookies on our website to give you the most relevant experience by remembering your preferences and repeat visits. By clicking “Accept All”, you consent to the use of ALL the cookies. However, you may visit "Cookie Settings" to provide a controlled consent.
Cookie SettingsAccept All
Manage consent

This website uses cookies to improve your experience while you navigate through the website. Out of these, the cookies that are categorized as necessary are stored on your browser as they are essential for the working of basic functionalities of the website. We also use third-party cookies that help us analyze and understand how you use this website. These cookies will be stored in your browser only with your consent. You also have the option to opt-out of these cookies. But opting out of some of these cookies may affect your browsing experience.
Necessary Always Enabled
Necessary cookies are absolutely essential for the website to function properly. These cookies ensure basic functionalities and security features of the website, anonymously.
Functional
Functional cookies help to perform certain functionalities like sharing the content of the website on social media platforms, collect feedbacks, and other third-party features.
Performance
Performance cookies are used to understand and analyze the key performance indexes of the website which helps in delivering a better user experience for the visitors.
Analytics
Analytical cookies are used to understand how visitors interact with the website. These cookies help provide information on metrics the number of visitors, bounce rate, traffic source, etc.
Advertisement
Advertisement cookies are used to provide visitors with relevant ads and marketing campaigns. These cookies track visitors across websites and collect information to provide customized ads.
Others
Other uncategorized cookies are those that are being analyzed and have not been classified into a category as yet.
SAVE & ACCEPT